Central College is located in the Pella, IA, that features 6 outdoor tennis courts. Central also features a newly renovated 5 court indoor facility for use during inclement weather making it an ideal location for an adidas Tennis Camp. 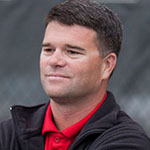 In his first season at the helm Ferrell led the Central men to a 5-2 mark in Iowa Conference play. The third place finish in the league standings was the highest for the program since 2009. A trio of men's tennis players also garnered all-conference honors.

Under Ferrell, Drake captured the Missouri Valley crown and an NCAA tourney berth in 2000, and a share of the league title in 2005. He posted an 81-76 dual meet record, including a 51-19 (.728) mark in conference matches. Seven Drake players earned all-league recognition during his tenure. He also served as a teaching professional at the Des Moines Golf and Country Club as well as the Wakonda Club.

A graduate of Baker University (Kan.), where he was a member of two conference championship squads, Ferrell earned a master’s degree at Wichita State University (Kan.). He spent 1995-96 as a volunteer assistant at the University of Kansas before gaining Division III experience in 1996-97 as assistant men’s and women’s tennis coach at the College of New Jersey, where he helped the squad take a New Jersey Athletic Conference title. He was also a teaching professional at the Princeton Racquet Club. He was an assistant at Wichita State University from 1997-99 and taught at the Wichita Racquet Club.

ALL Campers: Check In Sunday 1-2pm, Check Out Friday 12pm at the dorm building. Campers will train and play tennis on Central's 6 outdoor tennis courts. Dorms are air-conditioned.

I loved all the games we played, it was super fun and the coaches were really energetic and always up for teaching us new skills.

My kids have been going to the same camp for three years now and we love it! My two boys are always learning new skills and I can see how much they improve after each year.

It was great for my daughter to play tennis all summer on such great facilities on the college campus. My daughter has said how much she can see herself on that campus.