Inspiration Academy Tennis offers players a state-of-the-art facility located at the heart of competitive tennis in Bradenton, FL and only 20 minutes from the white beaches of the Gulf of Mexico.

The IA Tennis Academy develops champions from “the inside-out” through a transformational program that recognizes how character and the right heart, drive accomplishment. Our international coaching staff, with over 30 years of experience coaching elite and national teams, provides world renown training and mentorship for tennis players at all ages and levels.

Inspiration Academy coaches have proven results with a track record of developing champions from 6 years of age to pro-tournament winners, coaching both Davis Cup and Federation Cup Teams, and producing players who were awarded hundreds of college scholarships.  From the time a player walks onto our courts, they experience something dramatically different.  Our players experience real, quantifiable results. It is the intensive commitment to our “inside out training” that sets IA apart.

*Click HERE for our camp video or HERE for our schedule!
**Go to Inspiration Tennis Academy for more information. 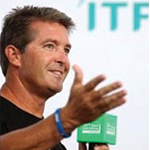 In his 4th decade in player development, Hobson has accrued proven principles, techniques and training for transforming contenders into champions. He has coached and presented all over the world in over 60 countries. Over the course of his journey, Hobson has produced junior Grand Slam Champions, professional circuit winners, ITF circuit winners, 100’s of college players and worked with over twenty top 100 tour players. He has also held the titles of National Coach, Davis Cup Captain and Federation Cup Captain.

On top of his rich coaching and playing experience, Hobson has been a guest speaker all across the world and has produced training videos such as "Movement for Tennis" and "Tennis Technique- Player Development". On and off the court he is dedicated to the development of all athletes he works with.