Due to the courts at the University of Redlands being redone in the summer of 2022, we will run our adidas Tennis Camp at Clement Middle School where we have access to all 6 outdoor tennis courts. More information can be found by CLICKING HERE!

Redlands is consistently ranked as one of the top schools in the West.  The campus features a 10 court complex which won the USTA Outstanding Facility Award and offers a great day camp experience as well as access to the school’s pool to cool the kids off during the day (pool not available in 2021). Join us at this tennis clinic and improve your tennis skills this summer!

The University of Redlands and Bulldog Athletics are excited to welcome Peter Yellico as the next Head Men's and Women's Tennis Coach.  Yellico will arrive on campus on February 14.

During his five-year stint as the Head Men's Tennis Coach at Pacific, Yellico compiled an impressive 95-41 overall record and a 63-12 mark in Northwest Conference (NWC) action.  He guided the program to its highest national ranking this past year by finishing 17th in the Intercollegiate Tennis Association (ITA) Division III National Polls.  In addition, Yellico coached three players into the national rankings, defeated Whitman College (WA) for the first time in 36 years, and was named the 2021 NWC Coach of the Year.  During his head-coaching tenure, fourteen student-athletes earned All-NWC honors and 34 became All-NWC Scholar-Athletes, while his teams collected ITA All-Academic honors every year and gained 30 ITA Scholar-Athletes.  Finally, his most recent recruiting class was ranked 24th by TennisRecruiting.net.

Beyond Pacific, Yellico volunteered as a Coach-Tutor with Portland Tennis & Education, an organization that serves more than 60 at-risk children from severely under-resourced families.  He also facilitated the grant writing necessary to be awarded the United States Tennis Association's (USTA) Collegiate Court Technology Grant of $10,000 for the Holce Tennis Facility at Pacific. Through this grant, Yellico oversaw the installation of PlaySight technology, which allows family, alumni, and supporters of the men's and women's tennis programs to enjoy live streaming of matches.

Before becoming the head coach, Yellico gained experience as an assistant coach for the Boxers, helping them to three second-place finishes in the NWC Tournament.  In 2016, Pacific men's tennis won a school-record 16 dual matches en route to an overall record of 18-4 and an 11-1 mark in the NWC, which led to Yellico being named ITA NCAA Division III West Region Assistant Coach of the Year.

In 2012, Yellico was recruited by 1993 French Open doubles champion Murphy Jensen to work as an elite tennis professional at the Sea Island Resort in Sea Island, Georgia.  In that role, Yellico taught juniors and adults with a wide variety of playing experiences and skill levels while coordinating and competing in exhibition matches with Murphy and his doubles partner Luke Jensen.  Yellico also worked as the professional hitting partner for WTA player Emily Harman.

From 2009 to 2012, Yellico grew as a tennis professional at the Bremerton (WA) Tennis & Athletic Club. During his tenure, he coached junior teams that reached USTA national competitions and coached five, nationally ranked, junior players.

Prior to his career as a tennis professional, Yellico served five years in the United States Navy as an Aviation Ordnanceman Second Class on the U.S.S. John C. Stennis, a nuclear-powered aircraft carrier. He was awarded the Navy Achievement Medal while serving in Operation Enduring Freedom and Operation Iraqi Freedom, before being honorably discharged in 2009.

Yellico played one season of collegiate tennis at the Savannah College of Art & Design.  He graduated from Pacific University with his bachelor's degree in business administration with a minor in finance.

Jake De Vries who has experience coaching at both the professional and collegiate levels, has joined the Uni. of Redlands tennis program as an Assistant Coach for both the men and women.

De Vries arrives at the University of Redlands after spending the 2020 season as an Assistant Coach with the Women's Tennis team at USC.  Before that in 2018-19 he was the Graduate Student Manager with the North Carolina women's tennis team. The Tarheels finished third in the country that season with five players ranked in singles (four in the top 21) and two doubles pairs nationally ranked. De Vries led the team's video reviews, charting and tracked match-by-match statistics.

He graduated in the spring of 2017 with a bachelor's degree in journalism and a minor in business administration and management.

Full Day Campers: Check in 8:45am Monday (9am every other day). Campers should be picked up at 4pm each day. (bring a bagged lunch)

Campers will train at the Redlands varsity tennis center. The Jim Verdieck Tennis Center, consisting of 10 outdoor courts, won the USTA Outstanding Tennis Facility award in 1998 and has been the site of numerous NCAA Regional Tournaments. Don't miss out on this California tennis camp.

My daughter came back from camp with a much improved served and even learned to hit a drop shot. Thanks adidas Tennis Camps staff for all the help. Can't wait to send her back next summer.

I loved all the different games we got to play during camp and the coaching staff was really funny.

My kids had such and awesome time at camp. I could really tell the coaches loved what they do and genuinely wanted to help everyone get better and have fun. 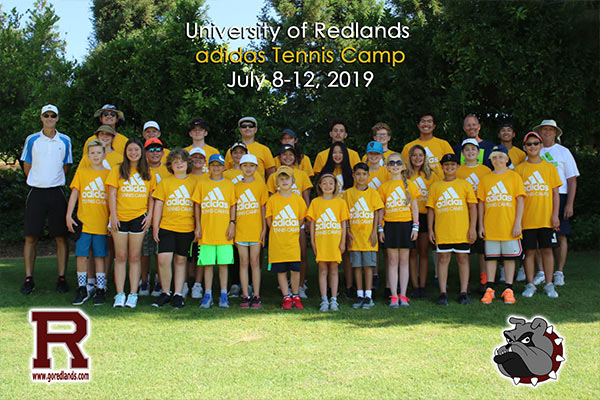