Situated on 400 acres, Choate is known for its academic excellence. Beyond Camps (formerly known as Michael Filipek Tennis and Sports Academy) located in central Connecticut, is a perfect spot for a day camp as campers will train at Choate's beautiful 14 tennis court complex.

Covid-19 Policy:  Copy of Covid-19 vaccination record or, if not vaccinated, copy of negative PCR or Rapid (antigen) test must be provided at check in. Unvaccinated campers must wear a mask in the cafeteria unless sitting and eating.

In his 17th year of directing camps, Michael Filipek is the founder and director of Beyond Camps (formerly known as Michael Filipek Tennis & Sports Academy). He was born and raised in central Connecticut, was a nationally ranked junior player and twice earned the #1 ranking in New England. He received a scholarship to attend Indiana University where he captained the men’s team and graduated in 1997. He subsequently gained professional tour experience in both the United States and Europe.

Michael brings his passion and lifetime tennis experience as a player and a coach to the adidas Tennis Camps making this an excellent choice for a tennis camp in Connecticut. His enthusiastic and caring style inspires players of all ages and levels.

For more information on this camp, please go to http://beyondtenniscamps.com/

Campers will train on the beautiful 14 court tennis complex. Don't miss out on one of the finest Connecticut tennis camps.

Rain Plan: If it's a full day of rain. We start activities in the morning indoors and then if still not able to play on afternoon go to Rocky Hill Indoor Club.

High School Players: We will have high school and tournament players in in camp and will be grouped together.

HALF DAY OPTION: For 5-7 year olds interested in doing the half day camp option from 9am-12pm, please contact support@TennisCamper.com

Covid-19 Policy:  Copy of Covid-19 vaccination record or, if not vaccinated, copy of negative PCR or Rapid (antigen) test must be provided at check in. Unvaccinated campers must wear a mask in the cafeteria unless sitting and eating.

This was my second year at the camp and I had a blast. Next year I am going to the adidas Tennis overnight camp with the new friends I met at this camp.

My favorite part of camp was being filmed and being able to look it over with Coach Filipek as he gave me pointers on what to change and do better on.

The high performance training was exactly what I needed. It was a high intensity, quick movement drills that not only worked my endurance but made me a stronger player. 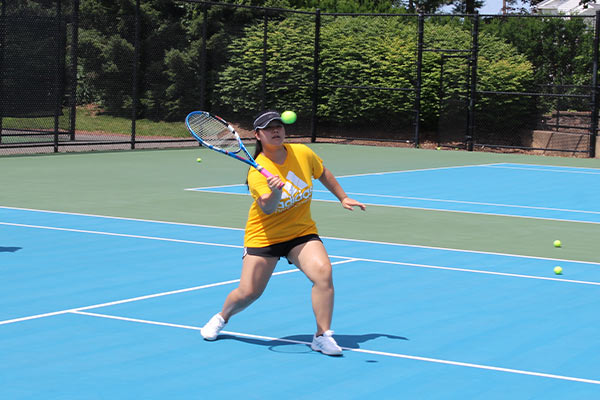