Colorado State University features 12 outdoor lighted tennis courts with a 25 foot viewing area making this one of the top tennis camps in Colorado. Located in the beautiful resort town of Fort Collins, this adidas Tennis Camp is sure to sell out! 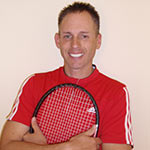 Steve coaches out of Longmont and Loveland, Colorado. He runs a public parks academy and has indoor courts at "Work Out West" in Greeley and is the Owner of Williams Tennis School.  He coaches approximately 200 players year-round including several with sectional and national rankings in the high-performance program at the club.  Steve runs one of the largest academies in the Intermountain section.  The "Front Range Academy" is a 20 hour/week team that trains and travels to all the sectionals.  The team has some of the best players in Colorado participating.  The FRA runs out of Greeley, Longmont, Fort Collins, and Loveland, CO.

Previously, Steve worked as the assistant tennis coach with the men’s tennis team at The University of Northern Colorado coaching Division 1 players and from 2011-2014 worked as the Head Tennis Coach at Loveland High School in Loveland, CO.  Steve coached at Woodside Racket Club, Overland Park Racket Club, and Lake Quivira Country Club in Kansas City before to moving to Colorado in 1998.

Steve grew up in the Kansas City area and played #1 varsity singles for 3 years for his high school, Shawnee Mission West.  Steve played #3 singles and #2 doubles and was a quarterfinalist at nationals for Johnson County community college. Steve graduated from the University of Kansas in 1997.  Still an active tennis tournament player at the 5.0 and Open level, Steve finished 2007 ranked #5 in Colorado at the championship level as a player and held a top ten singles ranking in 2008 and 2010 in Colorado.  Steve is certified as a Professional 1 by the USPTA and has completed the training at Boca Raton, FL for the High-Performance Coach certification by the USTA and USPTA.  More information about the FRA and Steve can be found at williamstennisschool.com.  Steve can also be reached by email at:  steve@williamstennisschool.com

Overnight Campers: Check in Sunday at 12pm at dorm Newsom Hall. Check out Friday 12pm at the courts.

Day Campers: Check In Monday 8:45am and should be picked up at 4pm each day at the courts. Check Out Friday 12pm at the courts

Half Day Campers: Check In 8:45am and should be picked up at 1pm each day at the courts. Check Out Friday 12pm at the courts. Lunch included. Limited to 6 spots. **6-9 year olds only

The facility features 12 outdoor courts (8 lighted) and a 25 foot viewing area, spanning the length of the complex to offer spectator viewing for 150 people. Each court is individually enclosed while the pavilion offers both men and women's rest room's.

For additional information on lessons and clinics year round, visit Williams Tennis School

The staff was extremely helpful in focusing on things we wanted to work on. They were willing to stay during the off hour before dinner to help me one on one with developing a kick serve. Highly recommend this camp.

Coach Steve did a great job working with my kids this summer. By the end of camp, I could really see a difference in their tennis game.

We love this camp. My son has been to camps all over and this was by far the best one yet.