HRC camp is focused on creating good foundation and technique for players of all ages and level. All our pro's are certified and have done their PA background checks. HRC has a 4 to 1 camper to pro ration which allows campers to receive more attention on and off the court.

With eight air-conditioned indoor tennis courts and a beautiful facility, the HRC summer tennis camp is a perfect spot to improve your game and have fun! 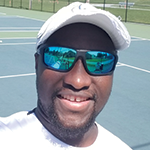 Eric Atobaba is the tennis pro at Hershey Racquet Club and he holds a USPTA and PTR Certification. He spent his early years in tennis as a touring pro in which he was a ITF Junior Top 200 player, Davis Cup Player from Ghana and a futures player. He is the former hitting partner for Raveen Kingsley and Anne-Liz Juekeng-Nkamgavo. Coach Eric is also the first coach for high rank junior players like Wayne Nelms Jr. and Jelani Sarr.

With his experience as a touring pro and a coach, Coach Eric puts an emphasis on technique, form as well as attitude, discipline and work ethic in order to get the most out of each and every player. Not only does his knowledge to helping campers be better on the court, but also in life.

Camp will run from 9am-4pm Monday to Friday each week of this summer and is open to all players 6-16 years old. The HRC offers before and after care to help accommodate all families schedules. Campers will bring their own lunch each day of camp.